During the year 2012, the County Administrative Board of Norrbotten, Sweden, has secured 21 natural areas to be protected as nature reserves for the sum of 12 million euros.

The protected areas offer the same possibilities for recreation, hunting, fishing and nature tourism as the rest of the region, but with the advantage that the forest will never be logged and nature will remain intact in the future. “We are hoping that residents of Norrbotten as well as tourists will discover the beautiful nature in our reserves”, states Ulf Bergelin, head of the Department for Nature conservation at the County Administrative Board.

A large pine tree has fallen and laid its silvery trunk in the moss carpet. Rönsmyran, Överkalix. (Photo: Frédéric Forsmark)

In 2012, 21 natural areas with high conservation values have taken a big leap forward towards becoming officially protected as nature reserves. Now the dry pine forest on Sandön, in the Luleå Archipelago, the mixed forests in Rönsmyran, the old-growth forest by the lake Allejaure in Arjeplog and many other high conservation value areas are secured until they get formal status as protected areas. 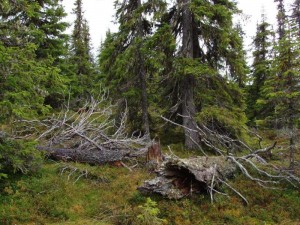 The process aims to protect valuable areas formally as nature reserves. The target areas are on private land and the financial resources have been used as economic compensation to the landowners for restrictions in land use, mainly for the value of timber restricted from loggings.

Through agreements with landowners, valuable forests are guaranteed to remain in natural state providing important habitats for animals and plants. At the same time, the forests are available to the public for recreation in accordance with the Swedish Allemansrätten (Everyman’s right), the constitutional right for everyone to access nature.

The red-listed three-toed woodpecker has put its marks in bark of the old spruces in Sidnåive, Arvidsjaur municipality. (Photo: Frédéric Forsmark)