Zaonezhye Peninsula is situated on the northern coast of the Onega Lake in Karelia, Russia. It shelters the famous Kizhi Island. The peninsula is characterized of high diversity of the basic limestone and carbonate rocks. In combination with especially fertile soils, this contributes to the development of high habitat and species diversity on which Zaonezhye Peninsula is considered as a separate vegetation region.  Europe’s second largest lake, the Lake Onega with clear and deep waters also affect positively to local climate. Scheme of Spatial planning of the Republic of Karelia (2007) intends the establishment there protected areas to preserve the most valuable nature objects.

Lowland parts of Zaonezhye Peninsula were profoundly affected with slash-and-burnt cultivation during ages, and the present distribution of forest types resulted chiefly from these earlier human activities. Zaonezhye Peninsula has network of late medieval villages and there have been viable rural society until middle of 1900s. Nowadays most of the villages have been abandoned and as a remain of old glory there are still some pieces of marvelous Russian wooden architecture left in certain villages, especially many old churches are still standing due to the repairing activity of summer-time inhabitants. 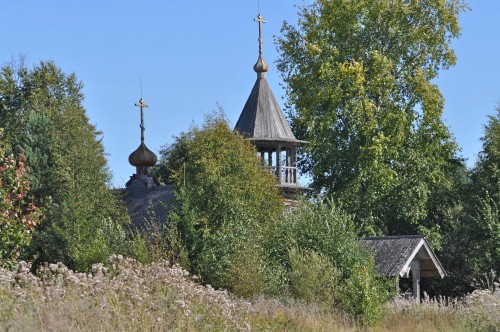 Originally the area was covered with coniferous forest growing in the conditions close to optimal and, therefore, characterized with high quality classes. At present, intact coniferous forests are preserved only in paludified areas and steep rocky slopes close to shoreline. Rest of the forests have been affected by selective cuttings and especially close to the villages forests are formed naturally on abandoned hay meadows and arable fields. According to forest inventory data of 1999, pine-dominated and spruce-dominated forests, in approximately equal proportions, occupy near 60 percent of the forest cover and the remaining area is covered by forests dominated by birch (ca. 30%), aspen (5%) and grey alder (6%).

Intact mires are preserved chiefly in midland part where they cover depressions between long narrow ridges. In lowlands, there are numerous small-sized eutrophic fens in the narrow bays along the shoreline which were formerly used by local population for haymaking, and presently combine mire and meadow vegetation including many red-listed species. Hydrology of many mires and brook-side forests are affected by European beaver Castor fiber that is rather common in this area.

In 2013, international expedition aimed to study valuable natural objects in southern lowland parts of Zaonezhye Peninsula was performed as a pilot project in the framework of the BPAN project. Experts from Directorate of Regional Protected Areas of the Republic of Karelia, Karelian Research Centre of Russian Academy of Sciences, Finnish Environment Institute, Universities of Helsinki and Eastern Finland, and Finnish and Russian non-governmental nature conservation organizations visited areas of natural forest and mires situated southern coast of the peninsula. Studies cover Kizhi forestry unit (lesnichestvo) and part of Velikaya Niva forestry unit (quartals  46-47, 69-71, 79-83, 97-100, 102-104, 114-117, 123-124,140-143, 158-162) in Medvezhyegorsk  municipality. In addition we visited quartals 174-185 of Sandal forestry unit in Kondopoga municipality. 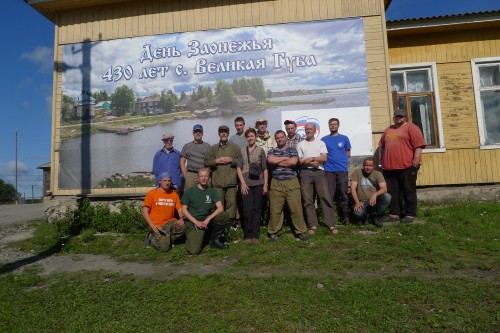 Current structure and composition of forest and redlisted species

Timo Kuuluvainen, Professor of Helsinki University, gives the following estimation: “According to the inventories, forests of the lowland parts of Zaonezhye Peninsula can be divided roughly into three classes. These are (1) Primeval forests of highest quality with negligible human impact, (2) Forest of high conservation potential, with earlier human utilization but rapidly developing natural values, and (3) Successional forests developing after abandonment of fields or forest pastures”.

The first class forests are primeval forests of the highest quality. These forests exhibit all the qualities of natural forests including diverse tree species composition, big trees and complex stand structures, and high amount and continuity of dead wood. Signs of human influence are either nonexistent or very few. Several threatened species of fungi: Pycnoporellus albolutescens, Piloporia sajanensis, mosses: Calypogeia suecica, Scapania apiculata, lichens: Arthonia leucopellaea, Sclerophora coniophaea, and insects, Pytho kolwensis, etc. were collected there. All of them are strongly declined and redlisted in Western Europe. 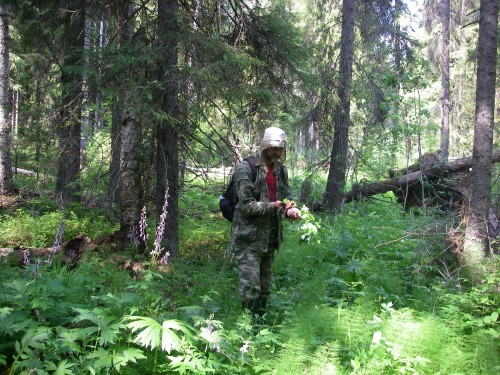 The second class forests are previously in history utilized by human to some extent, such as by selective cuttings, slash-and-burn cultivation or forest pasturage. However, since halt of human activity, the forest has developed through natural processes for several tens of years. They are rapidly restoring their natural values and are thus of high conservation potential. These include large trees, layered canopy structures and rapidly increasing amount of coarse woody debris. They harbour a set of saproxylic species of lichens, mosses, fungi and insects typical for intact boreal forest. Many of them are strongly declined in Western Europe, many are redlisted, e.g. a beetle Nothorhina punctata developing as larvae within thick bark of old pines.

The third class of forests consists of sites that have previously been under intensive human utilization but are now, after halt of human use, in early stages of natural forest succession. These are former fields, slash-and-burn sites or pastures near former villages. These successional stages include dense self-thinning alder stands and mixed deciduous stands with alder, birch and (often large) aspen, sometimes spruce ingrowth. Several places are rich in dead wood of aspen, on which were found several species of insects, like a fly Xylomya czekanovskii, beetles Hylochares cruentatus and Leiopus punctulatus having in Finland categories VU, EN and RE respectively. Also in Finland red-listed moss Neckera pennata and lichen Lobaria pulmonaria are growing commonly on huge aspens in different type of forests in Zaonezhye Peninsula. 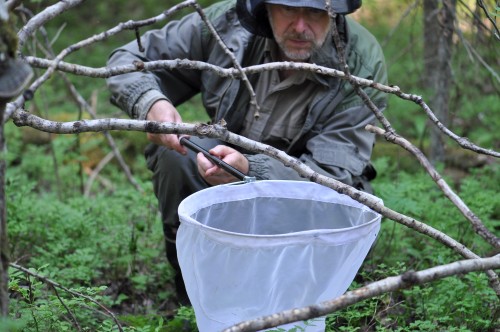 A list of species found during the expedition looks  quite impressive: 83 red-listed species, more than 100 species considered as indicators of valuable natural forest sensu Andersson et al. (2009), and very many otherwise interesting or rare species, – says Olli Manninen – a Finnish specialist in forest inventory and indicator species. Besides species listed in Red Data Book of the Republic of Karelia (2007), there are also several species of fungi, like Ganoderma lucidum, lichens Lobaria pulmonaria, Bryoria fremontii, and vascular plants, Littorella uniflora, Lobelia dortmanna, Isoetes lacustris which are also included in the latest Redlist of Russian Federation’s species (2005). Finding of some red-listed species are indicated on the map.

Recommendations for ecological tourism and conservation of biodiversity

The results of the expedition have shown that the lowland southeastern part of Zaonezhye Peninsula is important for the conservation of biodiversity and ecological tourism development. Based on the results of the expedition recorded rare and endangered species of insects, fungi, mosses, lichens and vascular plants in forest sites presenting different stages of the natural dynamics of forest ecosystems, we can recommend  the following areas for creation regional PAs in the rank of Nature Monuments with complete prohibition of all types of logging and other economic activities: