The 12th Conference of the Parties to the Convention on Biological Diversity was held in the Pyeongchang (Republic of Korea) between October 6th and 17th, 2014. Some thousands of delegates – including representatives of governments, nature protection NGOs, scientific institutions and indigenous peoples – from 190 countries of the world took part in the Conference. 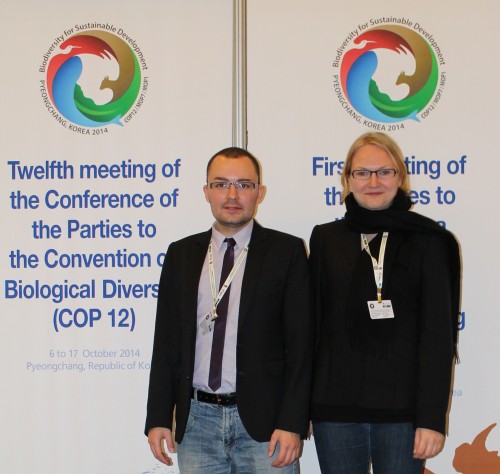 Denis Dobrynin from the Barents office of WWF-Russia and Anna Kuhmonen from the Finnish Environment Institute presented experience of nature protection in the Barents Region on the 12th Conference of the Parties to the Convention on Biological Diversity.

In the seminar on Arctic and Boreal biodiversity, Anna Kuhmonen from the Finnish Environment Institute presented the results of the work in the BPAN project on evaluating the management effectivenes and representativeness of the protected area network in the Barents Region. The BPAN project is one of the important instruments for achieving the goals of the Convention on Biological Diversity, since its main tasks are to protect natural habitats and slow down the degradation and fragmentation of valuable natural territories by means of the creation and maintainance of an effective network of protected areas.

The director of WWF-Russia Igor Chestin told about threats to the nature in the Barents Region, the work and nature protection achievements of WWF in this geographical region, about plans for the future and about cooperation with collegues from the Nordic countries. The side event was organized by the Arctic Council Conservation of Arctic Flora and Fauna group and the Barents Euro-Arctic Council. Also the work of Arctic Biodiversity Assessment was presented.

Participants of the side-event discussed the particularities of creating a transboundary ecological network between countries with different cultures, histories and political systems. Another question brought up in the seminar was how countries from other parts of the world (for example, Asia), which are heavily populated and therefore consume a lot of resources, could help to protect the Arctic and Boreal nature. Nature protection NGOs from Taiwan and the Republic of Korea showed interest in contributing to the protection of northern nature through the development of sustainable consumption.

The UN Convention on Biological Diversity is one of the most important international instruments in the sphere of nature conservation. It is a legally binding international agreement that was signed in Rio de Janeiro on June 5th 1992 and entered into force on December 29th 1993. The main goals of the convention are the conservation of biological diversity, the sustainable use of its components, and the fair and equitable sharing of benefits arising out of the utilization of genetic resources. More than 190 countries of the world have ratified the conventions, including all the countries in the Barents Region.