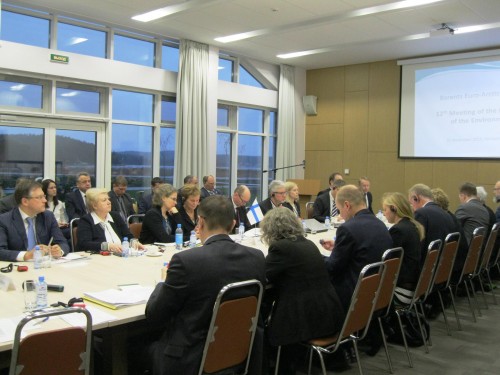 The Barents Environment Ministers’ meeting was held on 24-25 November 2015 in Sortavala, in the Republic of Karelia, Russia. BPAN Project was presented there by Henna Haapala (Ministry of the Environment, Finland) together with the Green Belt of Fennoscandia. Barents – nature has no borders -exhibition was also presented in the meeting.

The Environment Ministers noted the successful completion of the first phase of the BPAN Project (Barents Protected Area Network) providing a comprehensive analysis of protected areas in the Barents Region and measures to strengthen the network and welcomed the launch of the second phase of the project, which focuses on preservation of high conservation value forests and coastal areas.

Ministers also welcomed the work done to develop the Strategy for Protection of the Intact Forests in the Barents Region, which was asked for at the 11th Meeting of Environment Ministers in Inari, Finland 4-5 December 2013, and acknowledged the Strategy as an important contribution to preserve the Region’s last pristine forests, and to meet the Aichi biodiversity targets of the Convention of Biological Diversity (CBD). The phase II of the BPAN Project (2015-2017) work implements the strategy in an important way.

The Barents Foreign Ministers had their meeting in October 2015. In the meeting the chairmanship of the whole Barents Euro-Arctic Council was turned from Finland to Russia. One of the priorities of the Russian chairmanship is environment and climate.  Implementation of phase II of the BPAN has been highlighted under this priority theme.