Warning: "continue" targeting switch is equivalent to "break". Did you mean to use "continue 2"? in /var/www/fs1/35/bpanfi/public_html/wp-content/plugins/qtranslate-xt/qtranslate_frontend.php on line 536
 Barents Region | BPAN.fi

The Barents Euro-Arctic Region is a transboundary area located in northern Europe, mostly north of the Arctic Circle. It consists of 13 administrative regions in the northernmost parts of Norway, Sweden, Finland and Northwest Russia, covering a total area of 1,8 million km² of which 75% is in Russia. The Barents Region forms a uniform natural area connecting northern parts of Europe and Russia. 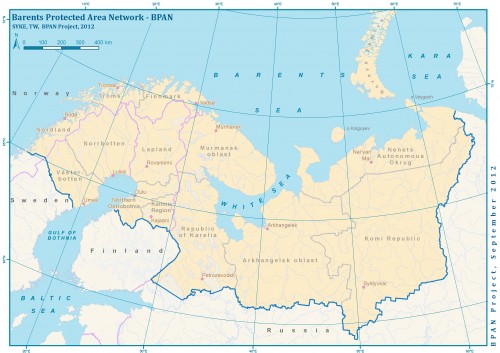 Barents region is situated in the northern parts of Europe. The map is produced in the BPAN project.

The Barents Euro-Arctic Council (BEAC) is a forum for intergovernmental and interregional cooperation in the Barents Region. It was established in 1993. The nature conservation subgroup of the BEAC Working Group on Environment coordinates cooperation on nature protection in the region.

The climate in the Barents Region varies, but in general the climate is humid with cold winters. The majority of the region is located in the continental subarctic or boreal climate zones. However, the Scandinavian Mountains, northern parts of the Kola Peninsula, Nenets Autonomous District and the Novaya Zemlya archipelago have an arctic climate.

The Barents Region is extremely rich in natural resources. Only few places on Earth are equally rich in forests, fish, minerals, oil and gas. At the same time, one of the largest remaining intact natural ecosystems on Earth is situated in the boreal and arctic nature of the Barents Region.