Exploitation of natural resources, and especially minerals, is strongly increasing in the Barents Region. Number of new mining projects is high, and, in many cases, they are posing a threat to both existing and planned protected areas as well as still unprotected high conservation value wilderness. 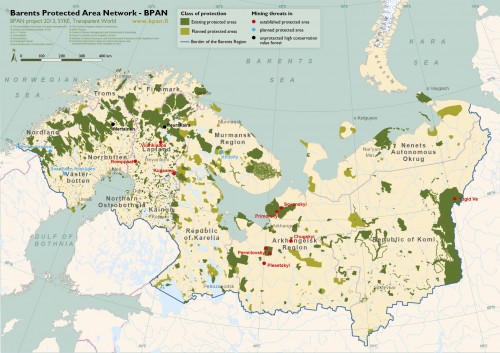 Some example cases of conflicts between protected areas and mining in the Barents Region. The map is produced in the BPAN project.

One well-known conflict case in Finland is the planned Kuusamo gold mine. Kuusamo area has potential also for mining uranium. The planned mine is situated only 10 kilometers from the popular Ruka winter sport center and connected to national parks Oulanka in Finland and Paanajärvi in Russia through river systems. Мining will threaten natural values of the Oulanka and Paanajärvi National Parks.

The local tourism sector and environmental non-governmental organizations are strongly opposing the mining plans. The mine is planned to be established in the reserved area of Käylä, Northern Ostrobothnia, during 2018.

The map was presented in the Conference on Best Environmental Practices in the Mining Sector in the Barents Region on 24 April, 2013, in Rovaniemi, Finland