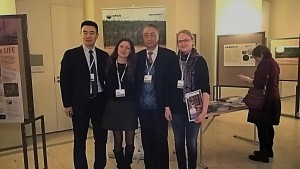 BPAN Project was present at the 2015 IUCN Regional Conservation Forum for Europe, North & Central Asia as a showcase success from the Barents Region on 14th Dec, 2015 in Helsinki. BPAN exhibition got a lot of positive attention in the exhibition area of the Forum. The Forum was held at the Main Building of the University of Helsinki.

Special interest for the project was shown by the president of the IUCN Mr Zhang Xinsheng who spent a whole while by the BPAN stand hearing about the BPAN and the Barents Region. The member of the BPAN Steering Committee Maria Dronova from the Ministry of the Natural Resources and Environment of Russia presented Mr Xinsheng the Barents Region and its characteristics. He was told also about the Barents Euro-Arctic cooperation format.

The IUCN Regional Conservation Forum for Europe, North & Central Asia is a platform for IUCN members to exchange, influence and network at the regional level and to shape the future of the conservation in Europe. In the Forum the European view on the topical conservation policies was shaped as a part of the preparations for the negotiations in the global arena. The Forum is organized every four years and this was the first time in Finland. There were altogether 240 participants from 41 countries in the Forum representing the member organisations of the IUCN: the governments, governmental institutions and NGO’s.